Like alchemists in search of a formula to turn base metals into gold, mixologists are using coffee to transform and revitalize long-established cocktail recipes.

After all, coffee – in everything from the most traditional to the most cutting-edge forms – has never been so wildly popular. Everyone’s going crazy about everything from specialty single origins to experimental creations such as nitro coffee and coffee in capsules for homemade cocktails, not to mention the wide range of brewing and flavouring options.

There’s something to suit all tastes and the number of new enthusiasts keeps growing, as do the ranks of people simply taking an interest and expert “coffee sommeliers”, who are also known as “coffeliers”.

What was once seen by many as a typically Italian drink now has a distinctly international feel and it has established itself as a key contributor to the balance of a range of cocktails.

The growing trend seems to be driving genuine cultural evolution, but is it just a passing fad or are genuine pleasures of the palate truly being appreciated?

Every coffee has a tale to tell and a selection of distinguishing characteristics that go better with some ingredients than others.

At a time when the cocktail world is becoming increasingly prestigious, a simple ingredient like coffee must be broken down and examined in detail in order to play a starring role in drinks whose many delights should always include the element of surprise.

After all, a cocktail is much more than just a mixture of ingredients or a new trend: it’s a display of human capabilities that’s based on in-depth knowledge of the ingredients, coffee, brewing and state-of-the-art blending technology. 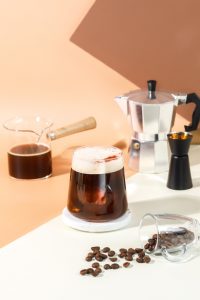 Like modern-day alchemists, the great bartenders are looking beyond tried and tested classics such as the Black Russian, White Russian, Alexander and Irish Coffee, as they aim to introduce consumers to new taste sensations.

Consequently, coffee cocktails are evolving and reaching new heights in terms of their flavours, fragrances and other features.

Meanwhile, scientists have highlighted the potential benefits of coffee, which can promote the digestive process and a properly functioning colon, while also protecting both the colon and the liver. Coffee cocktails were once seen as a strictly after-dinner affair but now they’re often also enjoyed before meals because they’ve become popular aperitifs.

The whole experience leads us into delectable new ground, where fresh flavours can be savoured.

Here’s a tip from Manuel: if you’d like to get creative and come up with your own concoctions, as well as thinking about the combinations of alcoholic ingredients, bear in mind that the acidity of Arabica can play a key part in aperitifs because it can make the mouth water. Meanwhile, Robusta’s bitterness means it has sharper, savoury notes to offer. Whatever you choose, espresso is the best type of coffee to use when making cocktails. 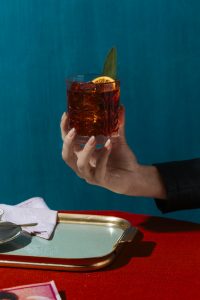